Download Mp3 MP4 Video Audio Deusi Bhailo Songs Collection
Bhailo and Deusi Re are traditional songs that are sung during the festival of light Dipavali and also called "Tihar" in Nepal. Children and teenagers sing the songs and dance as they go to various homes in their community, collecting money, sweets, food and giving blessings for prosperity. Bhailo is generally sung by girls, while Deusi is sung by boys. At the end of these songs, the woman of the house serve food and give money to these deusi/bhailo singers and dancers. In return, the Deusi/Bhailo team gives blessings for high income and prosperit 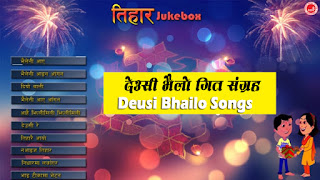 The origin about deusi bhailo is not very clear. However the song indicates that it is related to king Mahabali  since the lyrics include "We were sent by king Bali". Deusire can be broken down as Deu- which means give, and Sire-which means head. So Deusire means 'give head'. According to Puranas King Bali gave his own head to Vamana, the fifth incarnation of Lord Vishnu. Bali was performing the ashwamedhya yajna when Vamana approaches Bali and asks for three paces of land. Bali was very popular for giving alms to any one who came to his palace. Bali agreed to fulfil his demand. To Bali's great surprise, Vamana with his two steps covered the Earth and the Universe and asked the great king where he would place his third step. Bali then offered his own head. Lord Vishnu, seeing the devotion of bali, blessed him and raised to him to Suthala, the supreme position in heaven. For Bali greatest alms charity, he gained Lord Vishnu's favour and also attained salvation. There is also a belief in the month of Kartik (the month when Baliraja donated his head) if one donates something, it will do good to the alms-giver.

Bhailo is traditionally played after Laxmi puja, but recently it has been allowed to play before and after

By Nepali Computer Technology on 8:24 PM
→